You’re working on a semi-custom design for a customer. That means you need to be tied pretty closely to your single-board computer (SBC) vendor. In fact, you probably feel like you’re spending more time with the vendor’s FAEs than with your own family. And in some cases, that might even be true, at least in these crucial final stages of the design.

Finally, the product ships. Celebration time. Or is it? The customer has an issue. It’s a minor one, but it’s still an issue. No problem; just call that FAE who is pretty much your best friend now. Or is he? Now that the product has shipped, the FAE isn’t as easy to get a hold of. 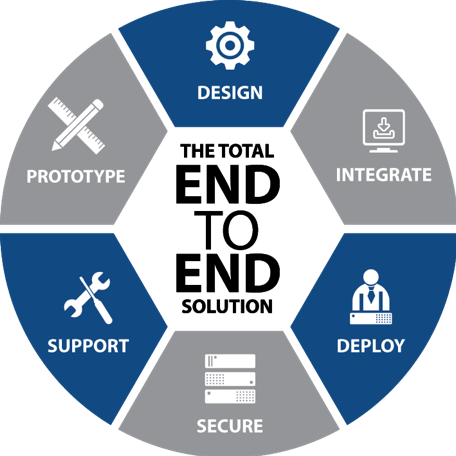 Many SBC vendors promise “end-to-end support.” But how many of those really stick to their word? In fact, what does that end-to-end support term even mean? According to Dictionary.com, end-to-end means that “the supplier of a system will provide all the hardware and/or software components and resources to meet the customer’s requirement and no other supplier need be involved.”

To me, it’s simple. We help you in the early specification phase. Obviously, we are helping you through the critical and timely design portion. But just as important, we’re with you after you ship the end system to the customer.

After your product ships, you or your customer may unearth something that wasn’t accounted for—you plan to put the system on a bouncing train? You should have told us that ahead of time. You plan to operate the system at very high altitudes? That would have been a good discussion to have early on in the specification phase. Sometimes, things just happen.

Also, just because your SBC supplier is deemed a “hardware vendor,” that doesn’t mean he shouldn’t be deeply involved in the software integration process, before, during, and after deployment. In fact, the SBC supplier is likely monitoring software patches from the operating system and tool suppliers to see if they have any effect on the hardware. And if so, those patches can be deployed using one of a few different methods, depending on what’s best for the end customer.

In fact, if the board is properly equipped, over-the-air (OTA) updates have become quite popular. This allows updates to occur at the most convenient times, using methods that are the least intrusive. They can also be done while the customer is installing other routine updates. And being OTA agnostic, we can integrate the updates into just about any process developed by the customer.

A pair of SBCs that can be used for end-to-end support along with a vendor who makes (and keeps) that same promise, are the SBC35-C398Q and the SBC35-427, both from WINSYSTEMS. Both boards have lots of I/O included with expansion options. The company supports off-the-shelf functionality with product documentation, sample operating systems, and technical support for customizations.

The SBC35-C398Q is a quad-core SBC that combines high-performance multimedia graphics with a rich mix of industrial I/O. Powered by NXP’s i.MX 6Q processor with integrated power management, it provides excellent efficiency and allows operation from -40° to +85°C without active cooling. Potential applications include security, transportation, medical, and digital signage.

The SBC35-427 is an industrial single board computer that takes advantage of Intel’s Apollo Lake-I E3900 series processor. Its combination of off-the-shelf functionality with multiple expansion and configuration options make it a great fit for industrial IoT applications. It also can operate from -40° to +85°C.