PC/104 is an embedded board standard that’s been around for quite some time, more than 30 years. When something sticks around for that long, that’s generally a sign that the spec was properly designed, with products that are able to weather the long-term technology cycles. 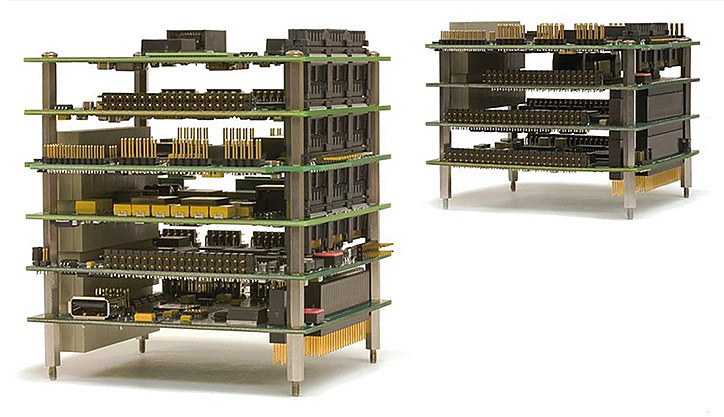 In the case of PC/104, the spec defines a rugged, compact, and expandable embedded computer. The 90- by 96-mm (3.6- by 3.8-in.) boards can interconnect and stack (see the photo) with each other, even when using boards from different manufacturers, assuming each manufacturer adhered to the specification. Note that the spec’s name comes from the use of 104 pins on the standard connector.

The applications that are suited to PC/104-based embedded computers are varied, ranging from industrial automation to telecom and even defense systems. And in between, you have things like gaming, smart retail, and energy and utility applications. Thankfully, the compute power of the boards has kept pace with other areas of the embedded industry. When an upgrade was required for an application, in most cases, it involved just a swap out of CPU cards.

One thing that’s changed from the time the original spec appeared until now is that many of the functions that appeared on individual cards can now be housed on a single CPU board, also known as the single-board computer (SBC). These SBCs can run on their own without any carriers, backplanes, or add-on boards, simplifying the process of system design, bring-up, and production troubleshooting.

Because that SBC still adheres to the PC/104 specification, using the standard connector, new boards, and the associated functions, can be connected at any time. So, system obsolescence is rare. Most PC/104 SBCs include a host of on-board I/O ports, such as USB and Ethernet.

One great example of an SBC that’s designed to the PC/104 specification is the WINSYSTEMS PX1-C441. A unique feature of the PX1-C441 is its PCIe/104 OneBank expansion. This port takes advantage of a small, low-cost bus connector that’s compatible with the full-size PCIe/104 connector that’s used on many of today’s SBCs. Through this connector, designers can stack boards without consuming board real estate.

The PX1-C441 gets its smarts from the latest generation Intel Apollo Lake-I dual- or quad-core SoC processors. Other features include up to 8 Gbytes of soldered down LPDDR4 system memory and a non-removable eMMC device for solid-state storage of an operating system and applications. The board supports M.2 and SATA devices, as well. Its small size, rugged design, and extended operating temperature range suit it for industrial IoT applications and embedded systems in the industrial control, transportation, Mil/COTS, and energy markets.

SBCs like the PX1-C441 can operate on their own, as they contain most (or all) of the functionality that’s needed for many applications. However, if additional functionality is needed, expansion is readily available through the PC/104 connector. Note that since the original spec was first ratified, lots of updates have occurred, with support for higher speed interconnects. The latest of those adds support for PCIe Gen 3 x16 signals.

PCI/104-Express (which is similar to, and often confused with PCIe/104) adds the speed of the well-accepted PCI Express bus to PC/104 boards. Besides the higher level of performance, this particular standard was chosen for its existing reach into embedded applications, including the availability of silicon. Combining the performance of PCI with the flexibility and inherent ruggedness of PC/104 is a win-win for the embedded computing industry.

To close the loop on PCI/104-Express verses PCIe/104, the difference is that PCIe/104 omits the legacy PCI bus to maximize real estate on the board. The two standards still share a connector location and pinout options. However, removing that legacy PCI bus connector breaks the compatibility with older PC/104-Plus and PCI-104 systems. If such compatibility really is required, it’s possible to design in a PCIe-to-PCI bridge device.

Maintaining a PCI architecture can also simplify the software adoption process, as most of the drivers are readily available. A large contingent of the PC/104 boards are based on an X86 microprocessor, but variations based on Arm and now NVIDIA microprocessors are starting to hit the streets, again proving that there is still plenty of life left in PC/104.

To understand better why PC/104 has stood the test of time, and will likely continue to be an embedded computing stalwart for years to come, contact the experts at WINSYSTEMS. The company’s engineers were instrumental in writing the original specifications and have been involved in each iteration since. They know which variation best suits different applications and why.