Organizations that rely heavily on data are increasingly likely to use cloud, fog, and edge computing infrastructures. These architectures allow organizations to take advantage of a variety of computing and data storage resources, including the Industrial Internet of Things (IIoT). Cloud, fog and edge computing may appear similar, but they are different layers of the IIoT. Edge computing for the IIoT allows processing to be performed locally at multiple decision points for the purpose of reducing network traffic. WINSYSTEMS’ expertise in industrial embedded computer systems can leverage the power of the IIoT to enable the successful design of high-performing industrial applications. 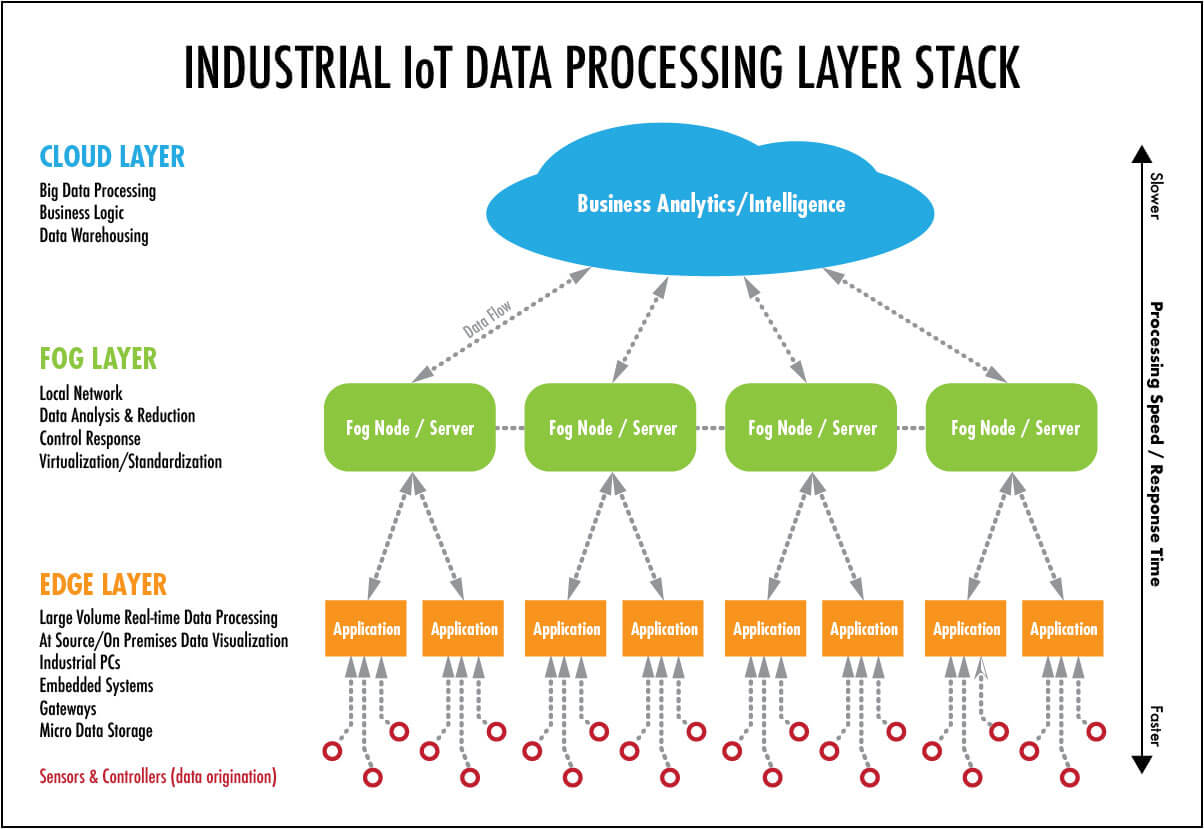 Most enterprises are familiar with cloud computing since it’s now a de facto standard in many industries. Fog and edge computing are both extensions of cloud networks, which are a collection of servers comprising a distributed network. Such a network can allow an organization to greatly exceed the resources that would otherwise be available to it, freeing organizations from the requirement to keep infrastructure on site.  The primary advantage of cloud-based systems is they allow data to be collected from multiple sites and devices, which is accessible anywhere in the world.

Embedded hardware obtains data from on-site IIoT devices and passes it to the fog layer. Pertinent data is then passed to the cloud layer, which is typically in a different geographical location. The cloud layer is thus able to benefit from IIoT devices by receiving their data through the other layers. Organizations often achieve superior results by integrating a cloud platform with on-site fog networks or edge devices. Most enterprises are now migrating towards a fog or edge infrastructure to increase the utilization of their end-user and IIoT devices.

The use of WINSYSTEMS’ embedded systems and other specialized devices allows these organizations to better leverage the processing capability available to them, resulting in improved network performance. The increased distribution of data processing and storage made possible by these systems reduces network traffic, thus improving operational efficiency. The cloud also performs high-order computations such as predictive analysis and business control, which involves the processing of large amounts of data from multiple sources. These computations are then passed back down the computation stack so that it can be used by human operators and to facilitate machine-to-machine (M2M) communications and machine learning.

For example, a jet engine test produces a large amount of data about the engine’s performance and condition very quickly. Industrial gateways are often used in this application to collect data from edge devices, which is then sent to the LAN for processing.

Fog computing uses edge devices and gateways with the LAN providing processing capability.  These devices need to be efficient, meaning they require little power and produce little heat. WINSYSTEMS’ single-board computers (SBCs) can be used in a fog environment to receive real-time data such as response time (latency), security and data volume, which can be distributed across multiple nodes in a network.

The IoT has introduced a virtually infinite number of endpoints to commercial networks. This trend has made it more challenging to consolidate data and processing in a single data center, giving rise to the use of “edge computing.” This architecture performs computations near the edge of the network, which is closer to the data source.

The IIoT is composed of edge, fog and cloud architectural layers, such that the edge and fog layers complement each other. Fog computing uses a centralized system that interacts with industrial gateways and embedded computer systems on a local area network, whereas edge computing performs much of the processing on embedded computing platforms directly interfacing to sensors and controllers. However, this distinction isn’t always clear, since organizations can be highly variable in their approach to data processing.

Edge computing offers many advantages over traditional architectures such as optimizing resource usage in a cloud-computing system. Performing computations at the edge of the network reduces network traffic, which reduces the risk of a data bottleneck. Edge computing also improves security by encrypting data closer to the network core, while optimizing data that’s further from the core for performance. Control is very important for edge computing in industrial environments because it requires a bidirectional process for handling data. WINSYSTEMS’ embedded systems can collect data at a network’s edge in real time and process that data before handing it off to the higher-level computing environments.

The growth of the IIoT has increased the need for edge, fog, and cloud platforms. WINSYSTEMS provides high-performance embedded systems that can be utilized in industrial environments to enable solutions for edge computing requirements and gateways within the fog platforms. Our embedded systems thus allow you to leverage your particular IIoT hardware and network infrastructure. Contact a WINSYSTEMS engineer today to learn more about the advantages of distributed computing and what it can do for your organization.